The previous post on these series I did a great leap forward. The truth is that mid-culture, things do not develop as quickly as at the beginning, or maybe it felt slower to me. Anyway, we left it a 17th of april with the first pollinated flower starting to develop; time for another fast forward. I will share some pictures to show the development of these cherry tomatoes. The backlit picture above was taken the 21st of april, 4 days after the last post. 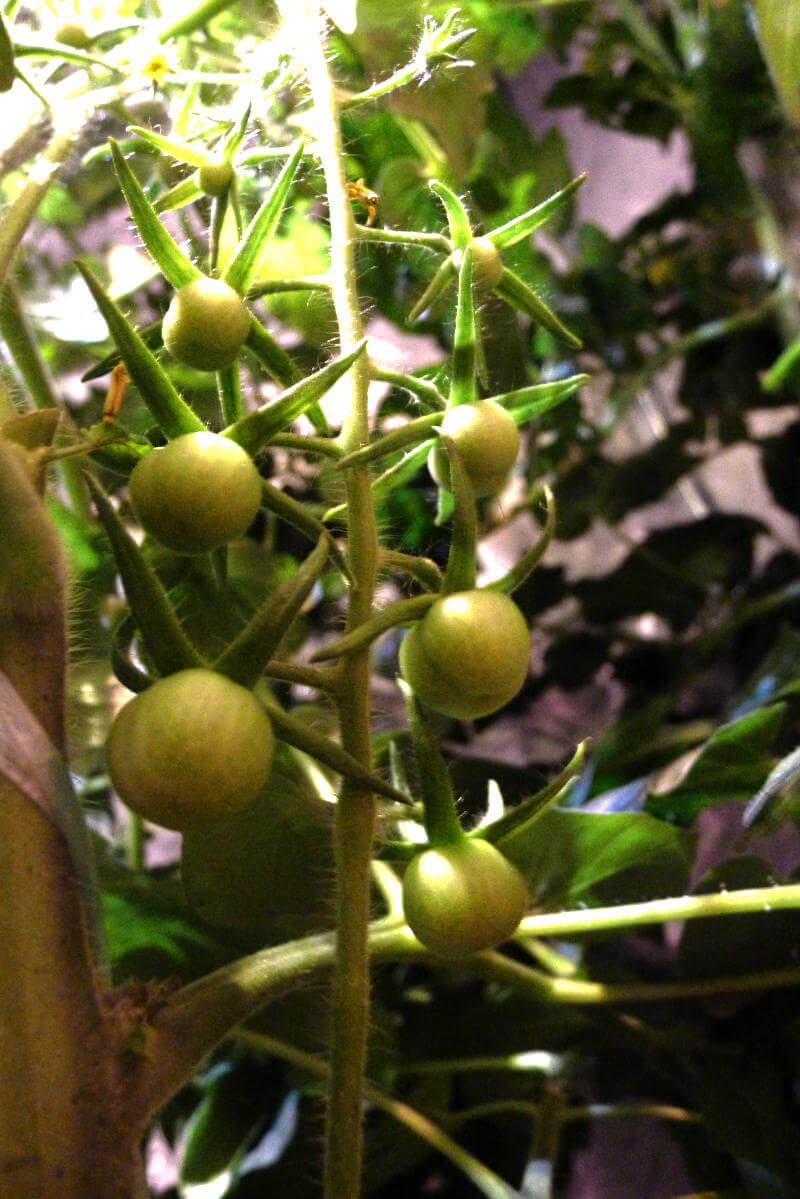 They already look like tomatoes. The vine is still upright. It will bend later because of the weight. 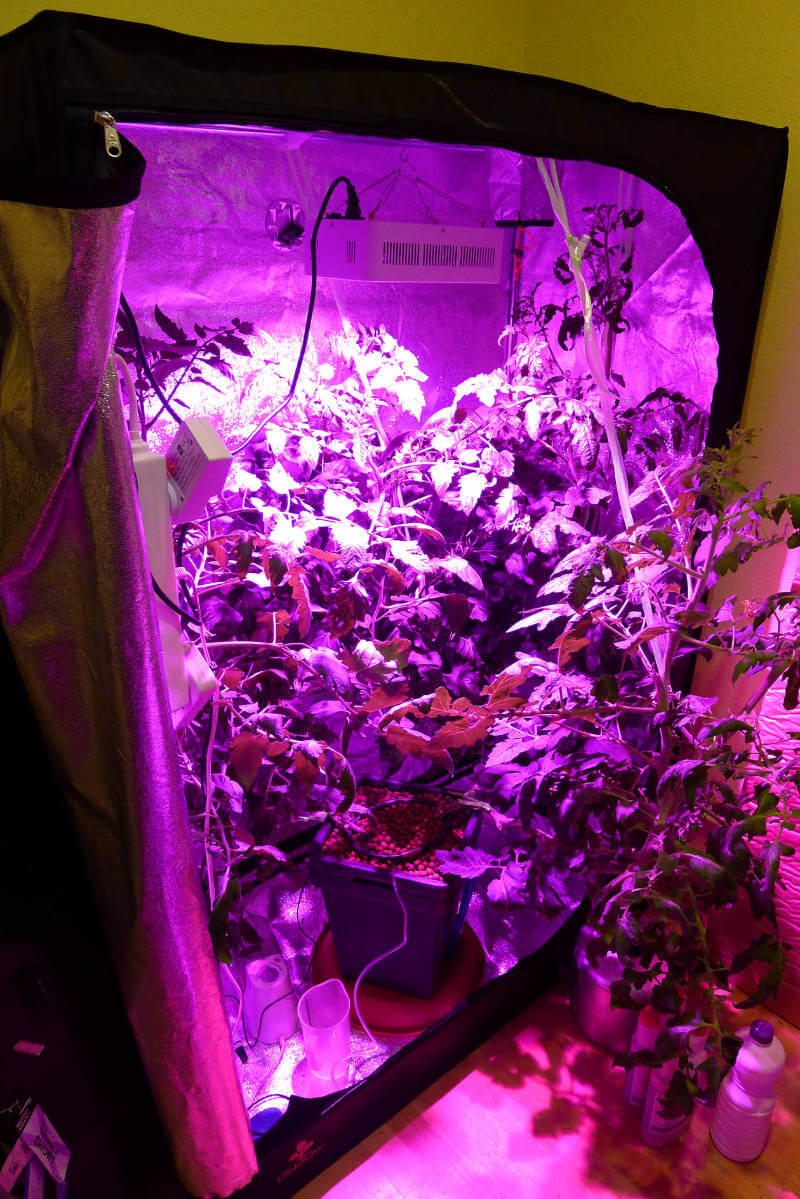 The plants keep growing and I raised the led lamp higher by eliminating the roller and folding the hanging wires. This is the highest I can put it, but I already know that it won’t be enough. 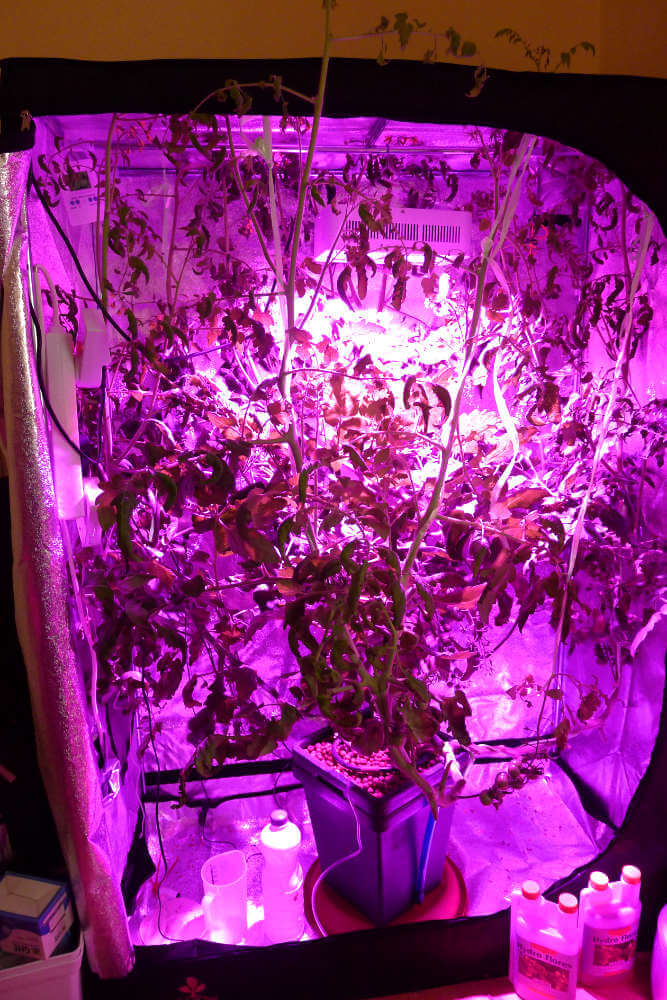 Only 2 weeks later and I am not sure what to do. Notice how one branch has gone through the vent, and some others are bending against the ceiling. Besides, the upper leaves receive almost no light. I decide to cut the growing tips and allow the plant to develop some of the lateral branches. 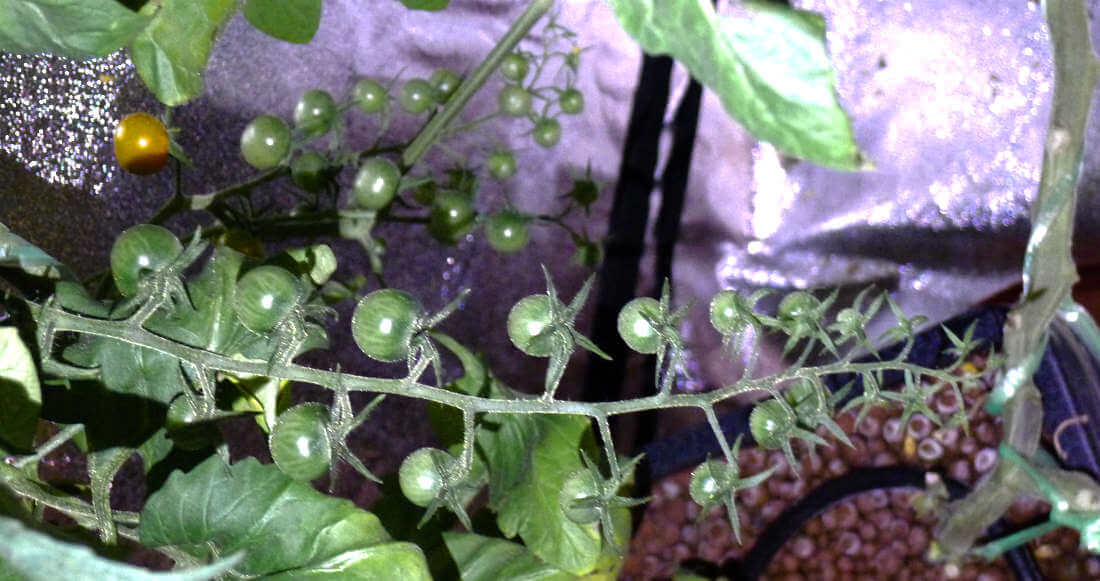 The same day I see the first tomate turning red. 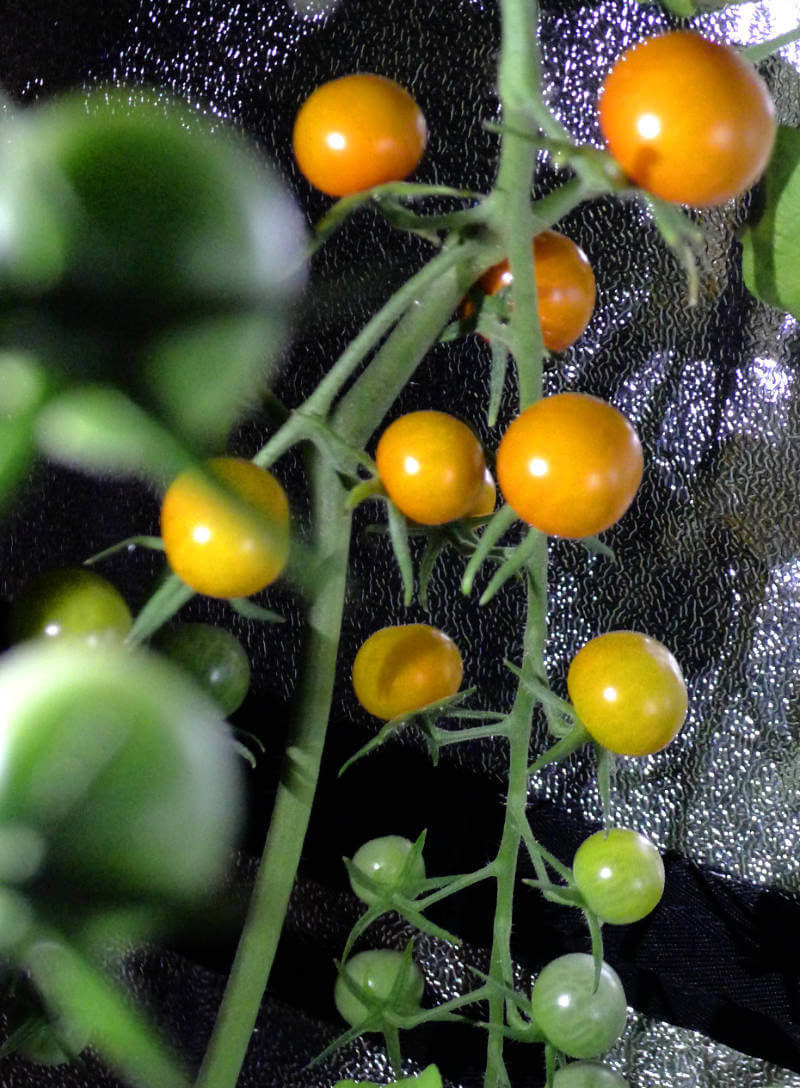 Surprise! This variety (Sungold) is not red, but orange. I have tasted the first one and it is delicious! 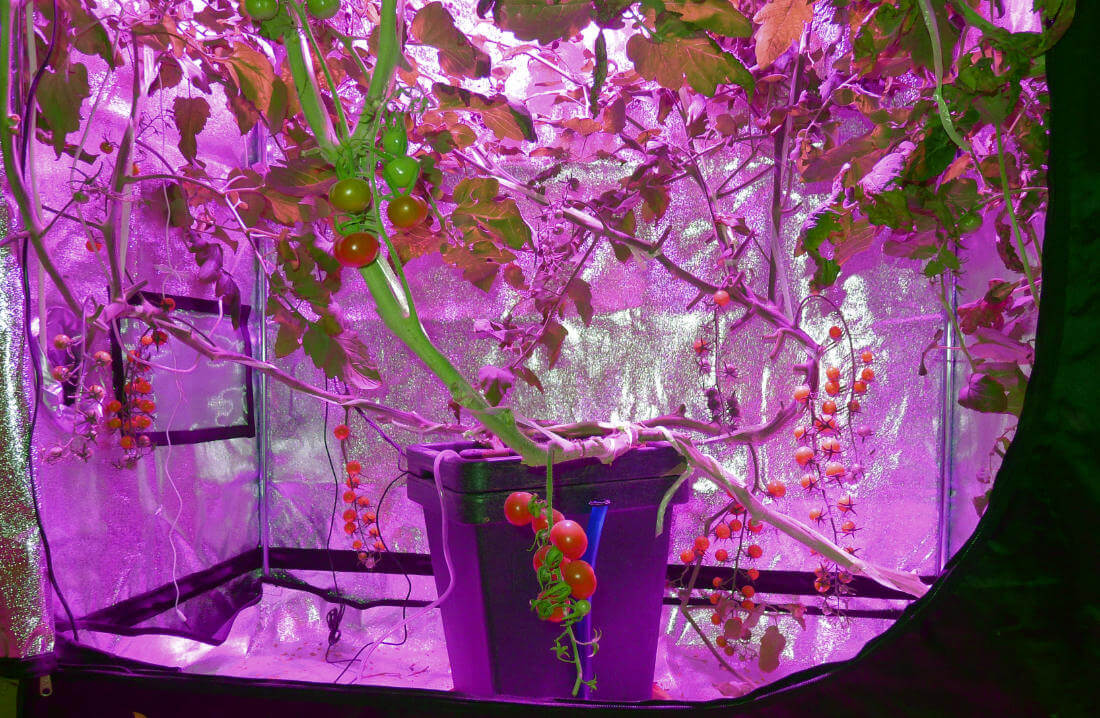 With the lower leaves taken out, you see the hanging vines ready to be harvested. I will do it tomorrow. There are two types of tomatoes here: the ones at the front are organic Gardener’s delight and the others are F1 Sungold. Next post I will write my impressions on the two of them. 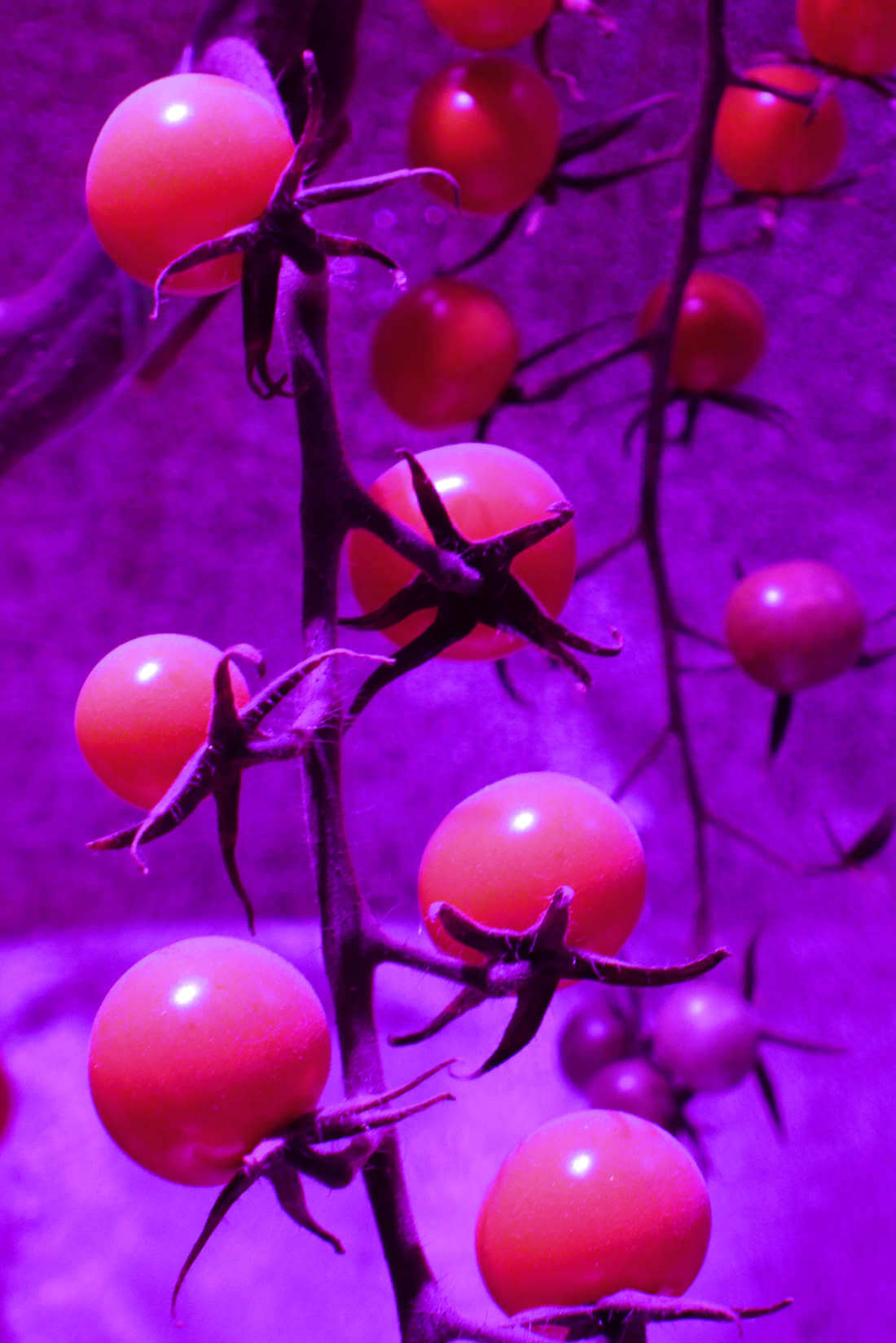 At last, time to harvest. The tomatoes look gorgeous and I cannot wait to share the result of my efforts with my family. Notice how the tomatoes look a bit dusty. It is not that I used any pesticide on them (I used none). Actually we have started some reforms in my house. Saddly I will have to cut the plants and store the hydroponic system. Besides, it is starting to be quite hot in the town I live, and the water temperature is not adequate for growing. Too high temperature means too little oxygen in it; the roots are in danger of hypoxia, which is rotting of the roots provoked by lack of oxygen. It is a pity because now that the plants are producing, I could expect to harvest some tomatoes every two weeks or so. Next time I will start my culture sooner, to have them producing during the winter. 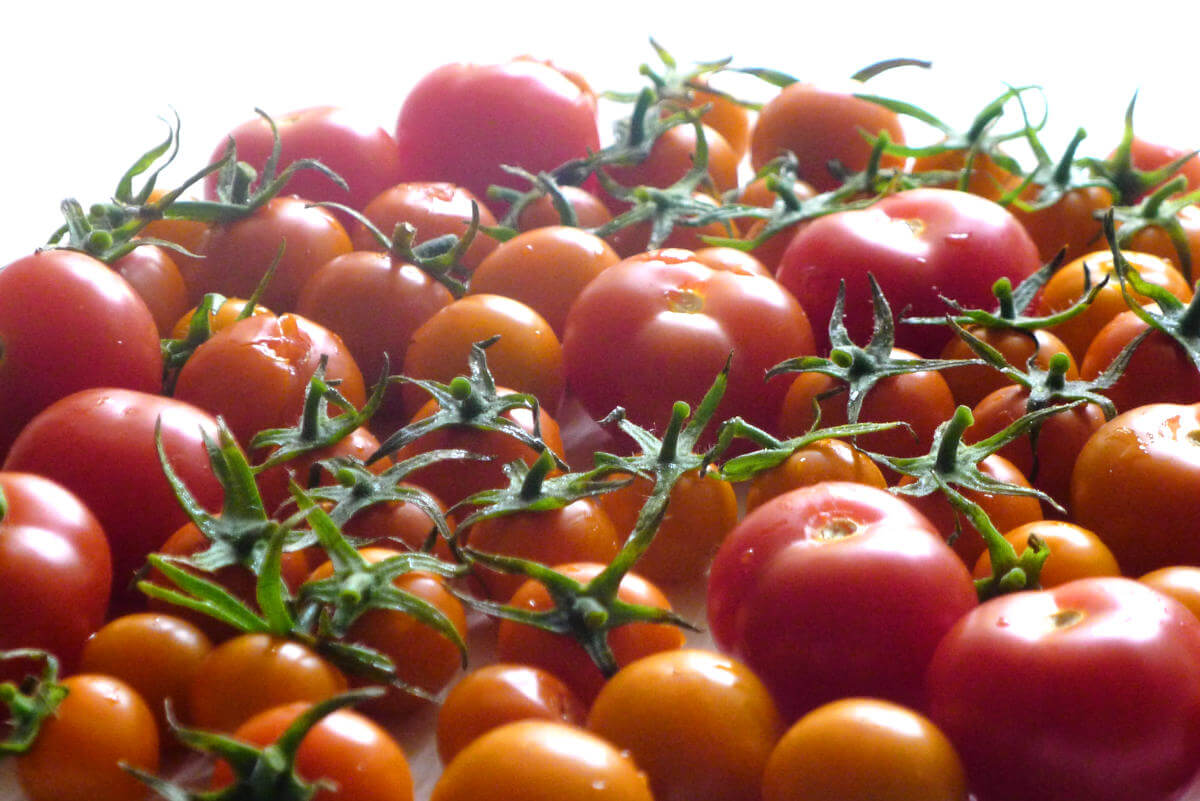