Home»nanny»Growing my indoor tomatoes
Previous Next

I am doing a little project of growing tomatoes indoors, using Nanny as my teacher. I started about 2 months ago and have been writing about it. Now that I have several of these posts ready, I will be publishing them, so you can have a sort of “step motion” fast view of the project.

Easyponic‘s mission is “to empower anyone to grow like a pro“. We needed a rookie to test if we can do just that, so I volunteered. I am eager to learn if Nanny can live up to its promise. I will also have the advice of Judith, our agricultural scientist; I’ll do my best to pass on to you her knowledge.

I wanted to grow something that I could share, so it couldn’t be cannabis; where I live it is still illegal. I thought about growing strawberries or flowers, but I decided to go for a more challenging culture: cherry tomatoes. It is more difficult because these plants can grow a lot and need to be tutored. Also, I love tomatoes and eat them almost everyday during summer, when they are tasty and nice.

As anyone who likes tomatoes knows, buying really good ones is not easy. The pressure on producers to grow commercial vegetables that seem to stay fresh for months provoked years of breeding for endurance and aspect. It had the side effect of producing some flavorless red fruits that look like tomatoes but do not taste like the real thing. My tomatoes don’t need to endure transport and storage or remain nice for weeks because I don’t plan to give them so much time 😉 I asked advice from a friend who sells seeds for a living and ended up choosing two varieties: a F1 Sungold and a organic Gardener’s delight. Both of them are known for its sweetness, and it will be fun to see which one will make better. I also planted a third variety, just in case, but didn’t plan to grow it. Jiffies are an easy way to germinate seeds, but do not forget to keep them moist! 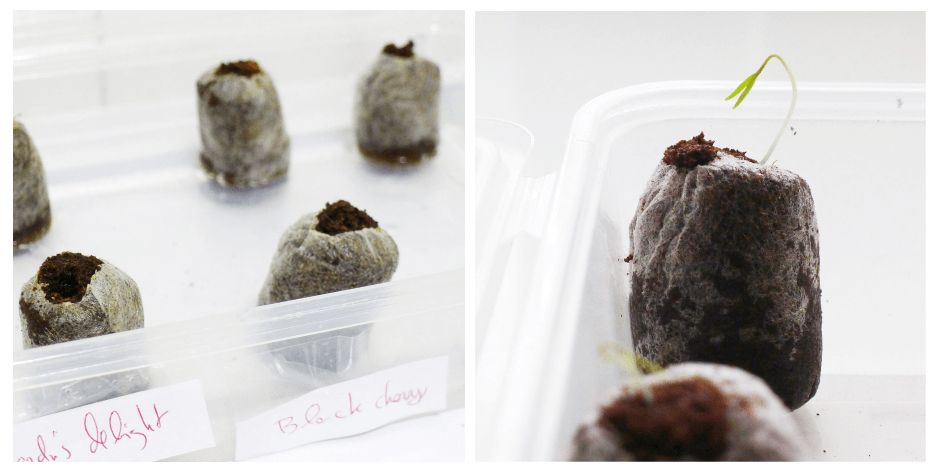 From seed to plantlet to seedling in five days. I thought this was fast, but I didn’t expect what was happening later…

I had to use a indoor growing closet with a grow LED, because I do not have a garden or terrace. I know that buying my tomatoes in the supermarket would be cheaper, but I do this for fun so I don’t really mind about this aspect. If I had a terrace I would have used natural lighting, but indoors, a LED light had to be. Damn these things are bright! This setup is commonly used by marijuana growers, but I do not know of anyone that has used it to grow tomatoes before. This is “terra incognita”: I am a pioneer!

While the seeds were busy germinating I mounted the closet. The seeds sprouted in 5 days, and our expert recommended to put them under a good light once they were an inch tall. Otherwise they tend to grow too tall, searching, and can even bend under their own weight. I just put them in the tent under the LED.

The LEDs iluminating the seedlings. This is total overkill; I would need a more efficient nursery.

My grower adventure had just started. As I said, this post is the first in a series in which I am writing about my little indoor culture. I hope you enjoy them and feel free to ask for details.